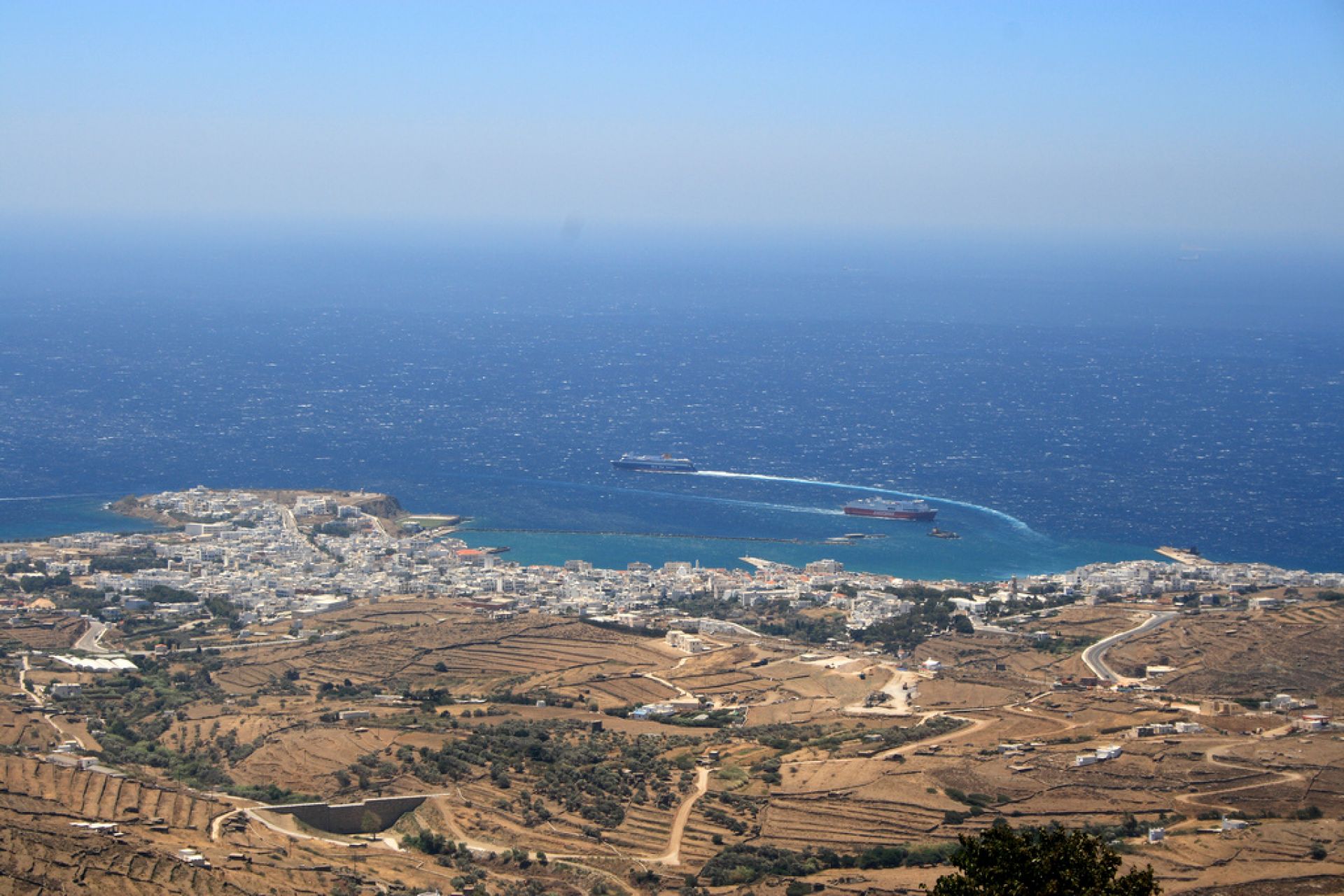 Tinos: the most spiritual island of Greece

Tinos is a destination for tourists who want an unspoiled corner of Greece with beautiful beaches. If you are in Mykonos and want to get away from the cosmopolitan and worldly atmosphere you can decide to take an excursion to this island.

Tinos is part of the Eastern Cyclades, and is located above the islands of Mykonos and Delos, to which it is rather close, and below the island of Andros. To the southwest is the Syros island. The island of Tinos has a predominantly mountainous and hilly surface, and the highest peak is Mount Tsikniàs at 726 meters above sea level. Tinos is the fourth largest island of the Cyclades, after Naxos, Andros and Paros (the latter just bigger than Tinos). It is inhabited by over 8,500 people.

Founded by the Ions, then colonized by the Phoenicians. It was conquered by the Roman Empire, then by the Byzantine Empire. At the beginning of the XIII, like the other Cyclades, Tinos became part of the Venetian dominions in the Aegean. The Serenissima controlled the island longer than all the other Cycladic islands, only in 1715 had to surrender the island to the Ottomans. 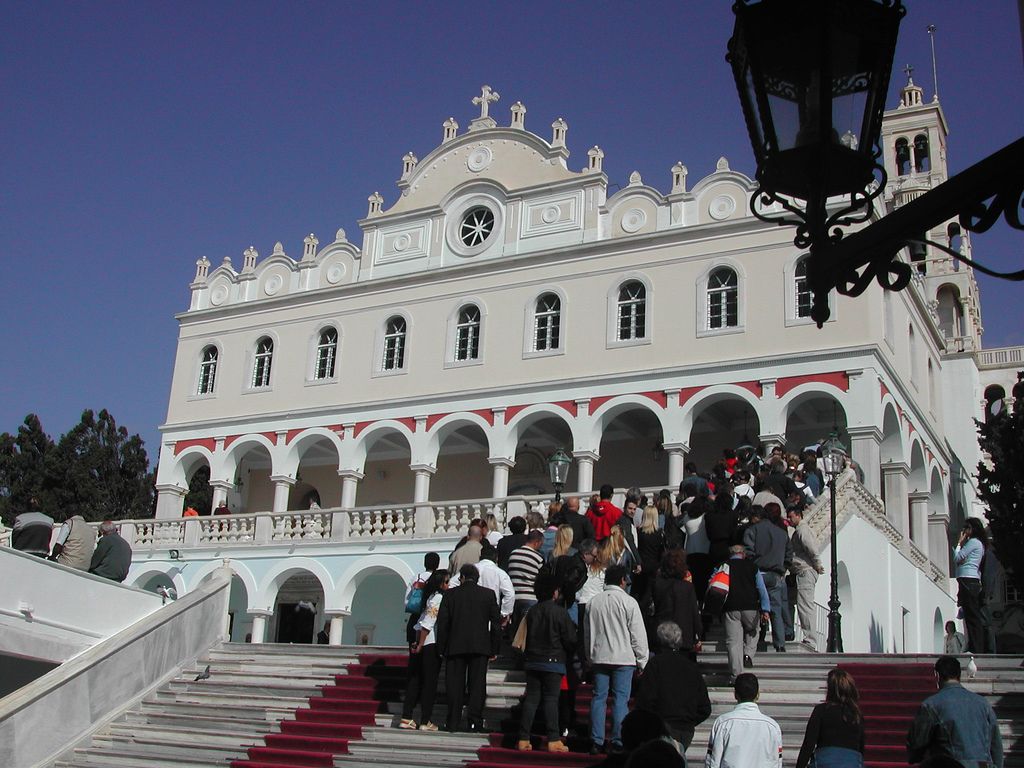 Tinos is not very touristy, a small pristine paradise, where international tourism usually does not arrive. It is frequented by the Greeks, especially pilgrims, thanks to the famous Shrine of Our Lady of the Annunciation (Panagia Evangelistria or "Megalochari", the one who grants great graces). In the nineteenth century the discovery of the icon of the Virgin was considered a miraculous event and even had an importance in the war of liberation of Greece from the Turkish domination. Precisely the sanctuary of Tinos is one of the most visited destinations by pilgrims in Greece, especially on August 15th. The Sanctuary of Panagia Evangelistria is located in the capital Tinos or Chora. The town overlooks a bay on the south coast of the island, and is the main port, where ships and ferries dock.

At the port of Tinos you can see the monument to the Greek cruiser Elli, which was torpedoed and destroyed by the Italians on August 15th, 1940, during the Second World War, before the ultimatum of Mussolini to Greece in the following October. 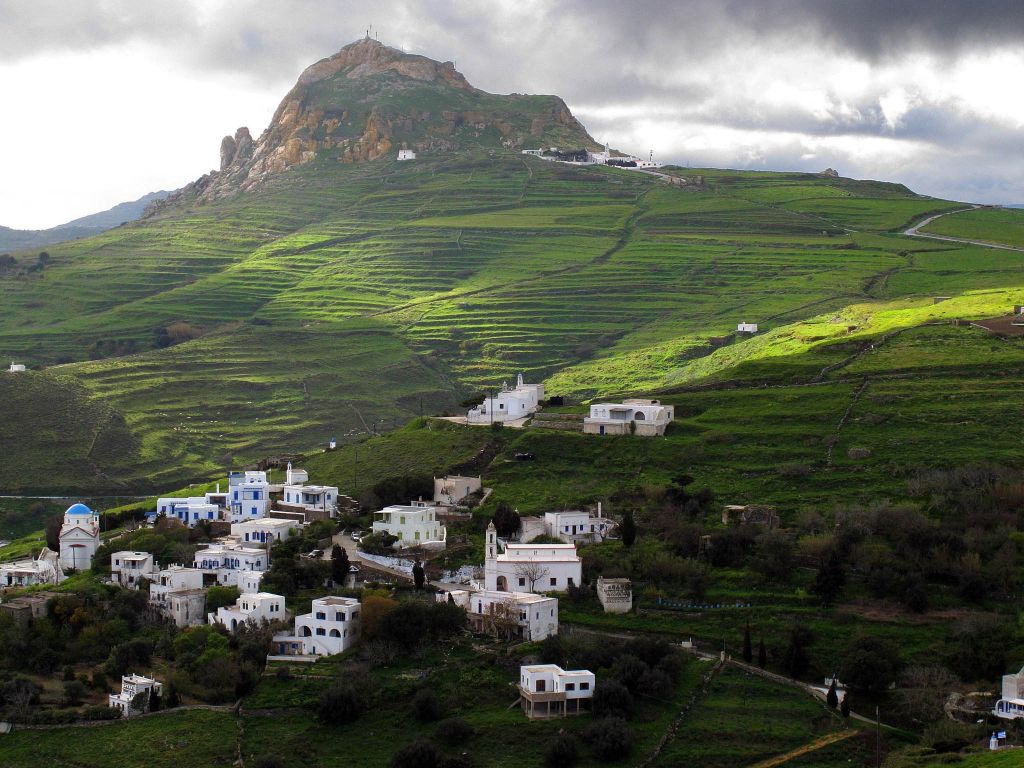 Among the other populated centers of the island, we point out: Exomovourga and Panormos. Tinos is dotted with numerous villages. Exomvourga (literally Outside the village) is the name of the town hall located in the hinterland north of Chora. Its territory includes the mountain of the same name, another 640 meters and with a top with a particular rock formation, on whose summit a large marble cross has been placed which is illuminated at night. The territory of the municipality of Exomovourga includes many characteristic villages, with typical houses and white churches. The villages rise around the ruins of the ancient Venetian fortress. 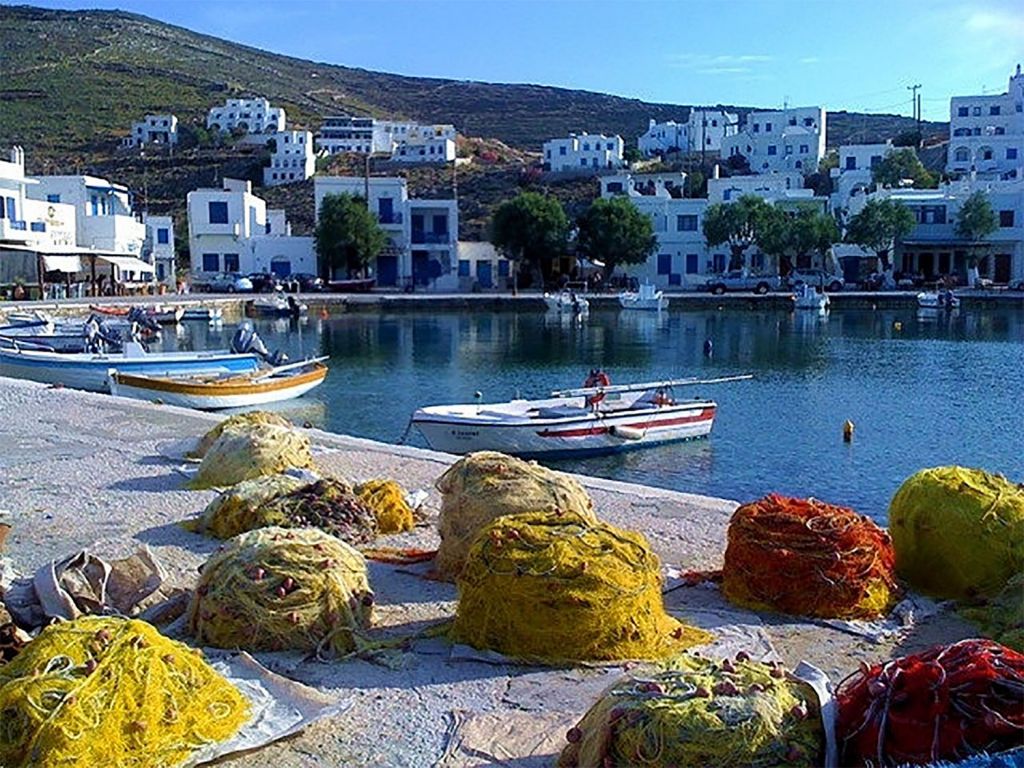 Panormos (or Pyrgos) is a village located on the northern part of the island of Tinos, where you can visit the church of Agios Nikolaos and the Museum dedicated to the sculptor Yannoulis Chalepas, born in Tinos and an important figure of modern Greek art. In the nearby hinterland there are marble quarries. Panormos also has a small port overlooking the north-eastern coast, dedicated mainly to fishing. 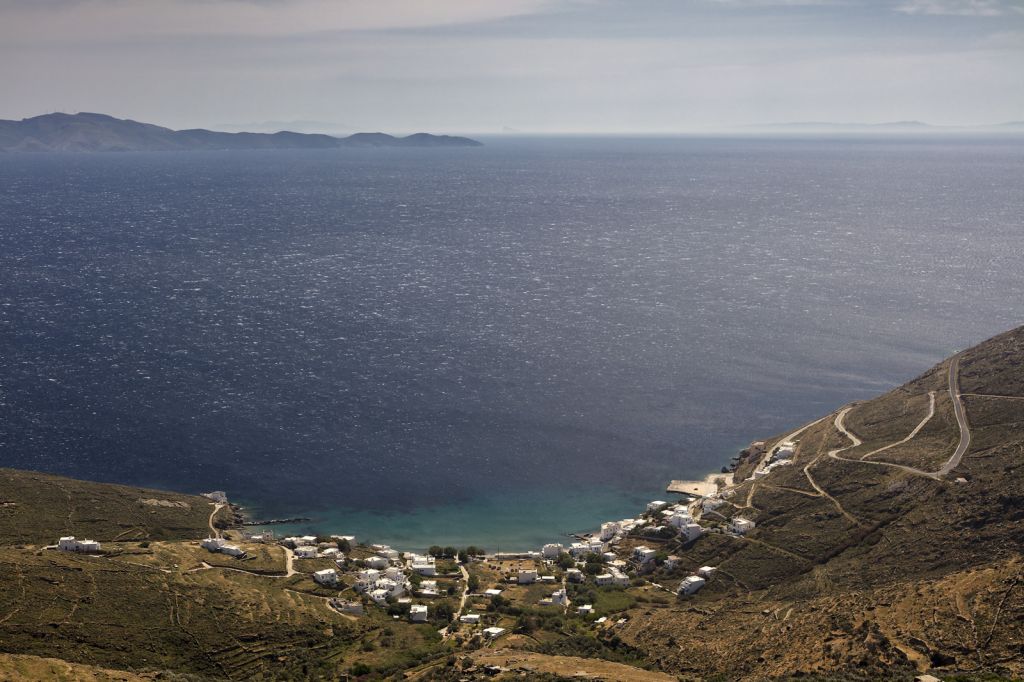 Also worth visiting is the village of Ysternia, a small but characteristic tourist center of the north-western part of the island. The village is located on the hills overlooking the coast, while the port and the beach are located in the natural bay below. The church of Agia Paraskevi is worth seeing. 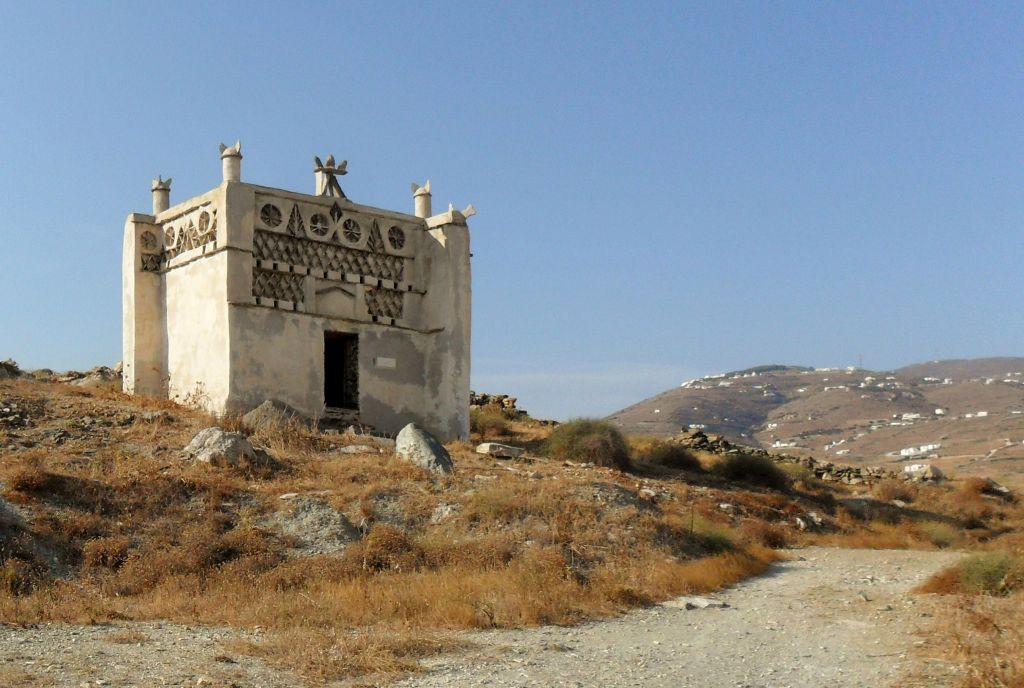 Also to be seen in Tinos are the characteristic pigeon houses: two-storey stone structures, built on the side of a hill or on the edge of a ravine, decorated with elaborate geometric patterns. They are also present on other Cycladic islands, but Tinos is the island that hosts them in greater numbers. The ground floor served as a deposit of agricultural tools and seeds and only the upper floor was used as a pigeon house. It seems they were introduced by the Venetians.

The island of Tinos is famous for its crystal clear sea. There are so many beaches and bays that are not crowded, where you can sunbathe and swim in total relaxation. Among the most important beaches we point out: Angali and Kionia, close to Chora. Then Agios Fokas, Agios Sotis, Laouti, Agios Ioannis. Do not miss the beaches of Agios Romanos, Agios Giannaki Porto, and Kolimvithra.

As for the typical Greek cuisine in Tinos, the island produces vegetables, honey and a particular herb called alifoni eaten in salads. Local specialties are garlic sauce, fried tomatoes, louza. To eat, we recommend the "Metaxi Mas" restaurant, which specializes in appetizers. Also recommended a visit to the pastry shop Zakaroplastion Mesklies, where the greedy can taste the Greek sweets like baklava (layers of puff pastry stuffed with honey and chopped nuts), loukumades (fried donuts and sprinkled with honey and cinnamon) and galaktovouriko (pudding of semolina flavored with lemon, cooked in milk and vanilla and secured by two thin layers of puff pastry).

You get to Tinos by ship, with ferries leaving from the port of Rafina, in the Attica peninsula, either direct or with a stopover in Andros. Rafina is less than 30 km from Athens International Airport. Alternatively you can reach Tinos from Mykonos, arriving here by plane (that of Mykonos is the nearest international airport to Tinos), and then take the ferry or hydrofoil.

A daily charter is the perfect way to explore your island of Tinos or discover others. With our Aquacraft service you can find the best yachts and impeccable service throughout. Check for more information at: http://www.aqualivingvillas.com/en/our-services#PBPSItem8972_30638a