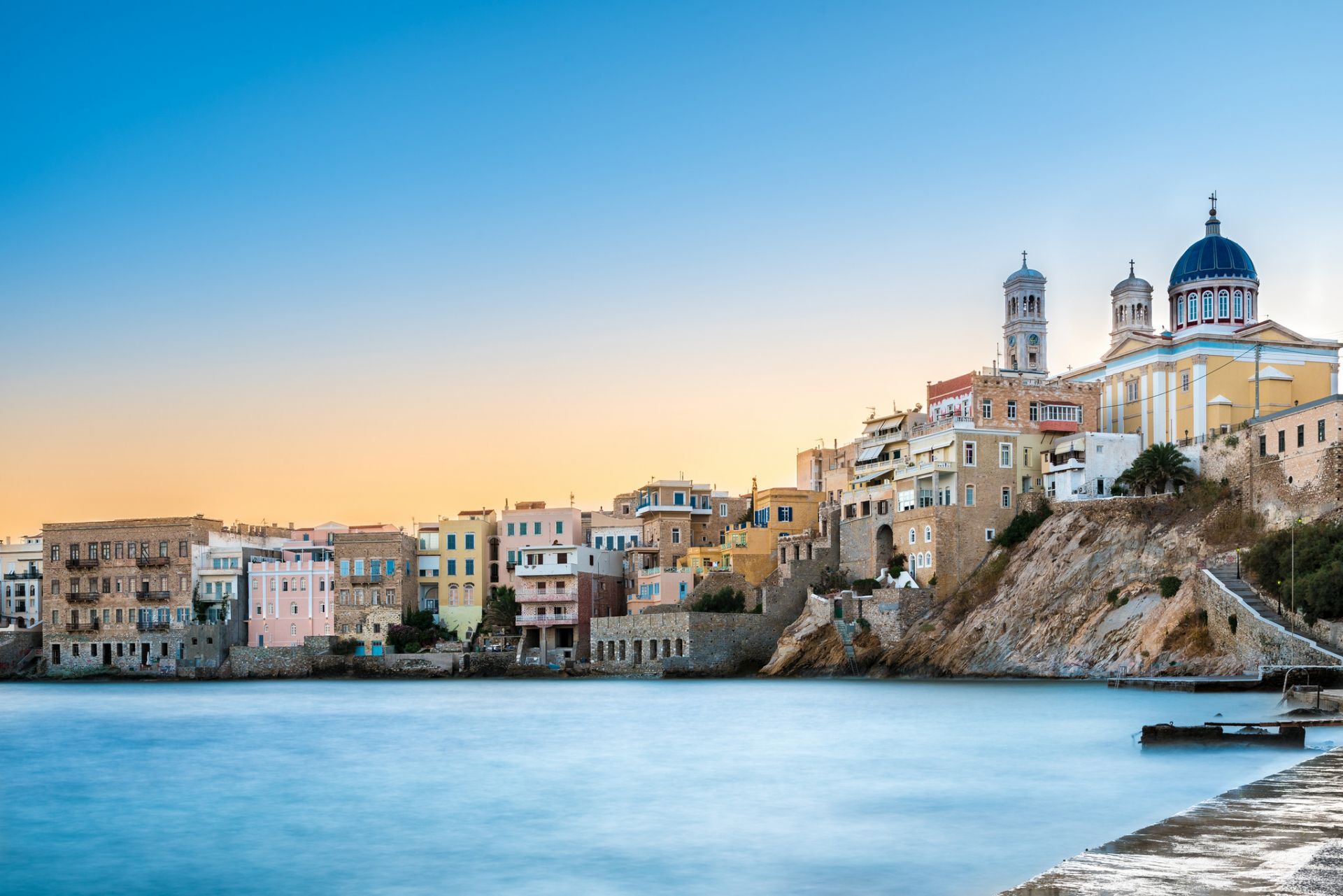 Today continues our itinerary in the heart of the Cyclades, discovering the island of Syros.

Located right in the heart of the archipelago, close to other Cycladic islands, Syros is an island of just over 100 square kilometers - about the size of Mykonos - little frequented by European and international tourism, which prefers more popular holiday destinations like Paros, Naxos, Santorini and Mykonos itself. Syros is home to the capital city of the Southern Aegean, Ermoupolis. Its university and its territory offer fascinating views as well as preserving the memory of important events of past history. 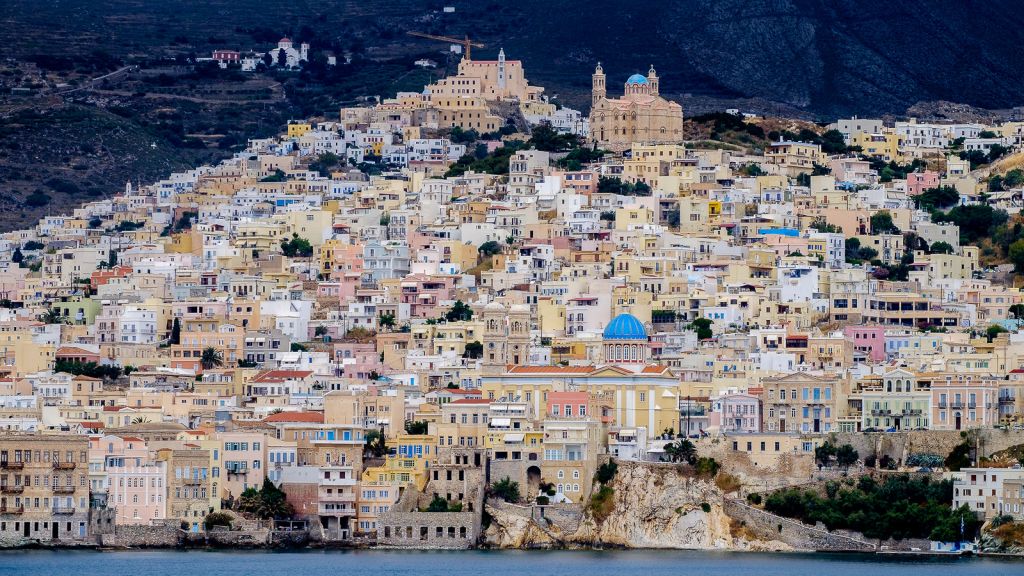 In this post we will discover the main attractions of the island, those related to its past, untouched nature and its beaches, in short, those that characterize a fascinating and authentic Syros, a true jewel of the Cyclades. The tour starts from the main city, Ermoupolis, capital of the archipelago and destination of the naval and air routes on the island, and continues counterclockwise along the entire coast. Ermoupolis is a beautiful city in the middle of the island perched on the hills on the east coast of Syros, the most populated Cycladic town. Of a recent foundation (19th century), Ermoupolis will impress you with its decidedly "traditional" architecture compared to other places and villages of the archipelago. It is in fact a modern city, with buildings inspired by the neoclassical style and beautiful churches. 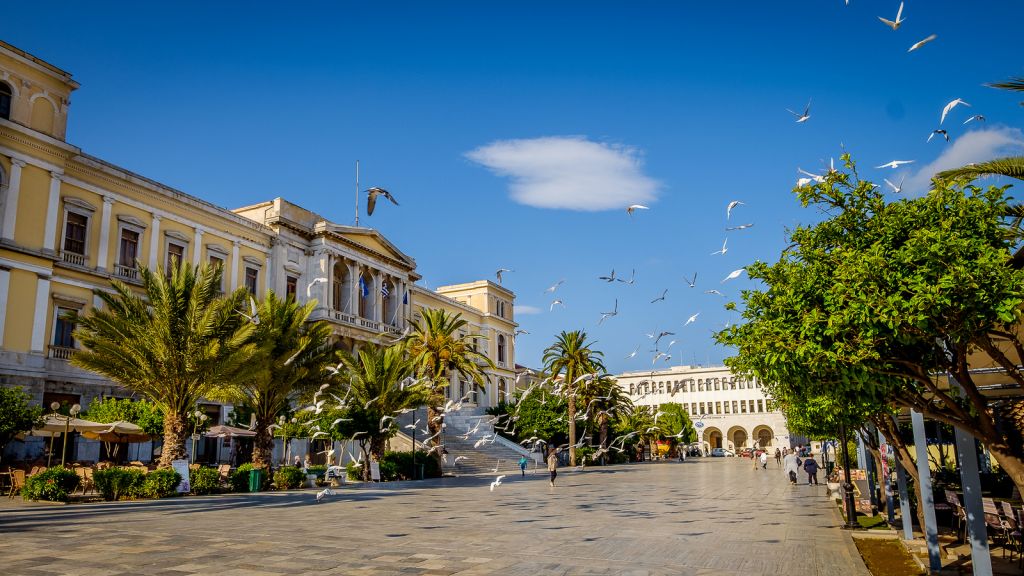 We suggest you start your visit from the Miaouli square, which overlooks the town hall and stop for a tour of the archaeological museum. Just above is the University of the Aegean. Continue with the Apollo Theater, the municipal theater, on Vardaka Square, designed by an Italian architect, who will strike you by the resemblance to the great European theaters: it is in fact identified by many as the La Scala of Milan in miniature. Move a little further to reach the impressive Byzantine church of Ermoupolis dedicated to St. Nicholas (Agios Nikolaos), built halfway through the nineteenth century.

Leaving the center of Ermoupolis, head towards the historic center of the capital, near the village of Ano Syros, a medieval settlement that houses the island's Catholic community. The population of Syros, for historical reasons, has a Catholic and an Orthodox soul (Venetians docked on the island and founded this small center and Genoese left important traces of the cultures of origin). In Ano Syros you can visit the Catholic cathedral dedicated to Saint George, the monasteries of the Jesuits and Capuchins and, if there is still time, the curious museum of traditional works (barber, farmer, fisherman ...).

Before concluding the visit of Ano Syros go to pay tribute to the Greek writer and philosopher Ferecide di Siro who is responsible for a teagonia, "the seven caves", a milestone of ancient Greek literature; the bust is in a panoramic position. Leaving the district of the capital city, head northwards to reach the archaeological areas of Chalandriani and Kastri, settlements dating back to the third millennium BC, respectively acropolis and necropolis, the latter very extensive, which has about 600 tombs. Nearby you can find beautiful beaches where you can relax.

In the northwest of Syros, instead, you find Apano Meria, a mountainous area with a particular geological conformation, with barren and scrublands, caves and caves. It is almost completely uninhabited, but it is worthwhile approaching for a swim in the beautiful sea; keep in mind that some coves can only be reached by boat or through narrow and steep passages. Among these, Grammata, Gria Spilia, Lia (in the bay of Aetos), Megas Lakos, Marmari. 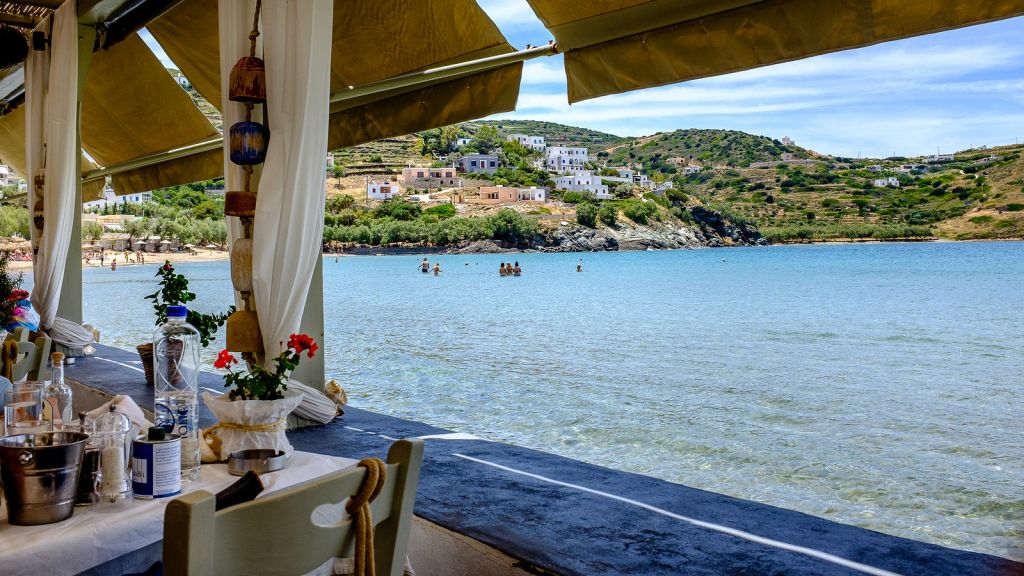 Going down the west coast, in the middle of the island, there is the beautiful fishing village of Kini: here you can find a passage by sea to reach the coves and the most hidden beaches of Syros. But also admire the Catholic church of the Virgin Mary and the monastery of Agia Varvara or stop at some inn to taste the local cuisine. If you happen to Kini at the end of June, you can attend the festivities in honor of St. Peter's.

Small villages and beautiful beaches follow one another in the south-west coastal area. Close the Syros island tour on the south coast, an ideal place for diving and snorkelling ... Take a trip to Megas Gialos or, if you are traveling with your family, to Achladi, which has an equipped beach and calm waters. The resort is located 8 kilometers from Ermoupoli, where among other things you can find information about diving schools on the island. 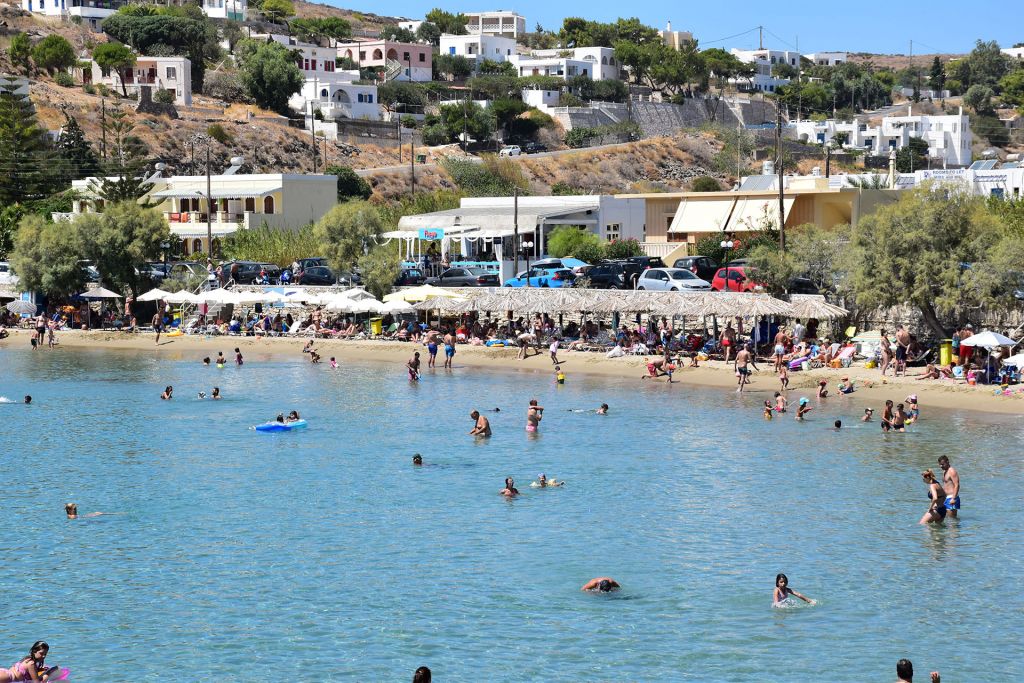 The island can be reached by direct flight from Athens (about half an hour) with destination "Demetrios Vikelas" airport - dedicated to the first organizer of the modern Olympics and originally from Syros - or alternatively, by sea. The ferries that dock at the port of Ermoupolis come from Piraeus, from Rafina and from the other Cycladic islands, from the Dodecanese and from Crete; the duration of the trip goes from 4 hours to reach Piraeus (less if you opt for fast ferries) at an hour and a half to two hours to go to Rafina and the other islands of the archipelago.

If you want to make your holiday in Mykonos truly unforgettable, discover our exclusive villas and all the services available to our guest.