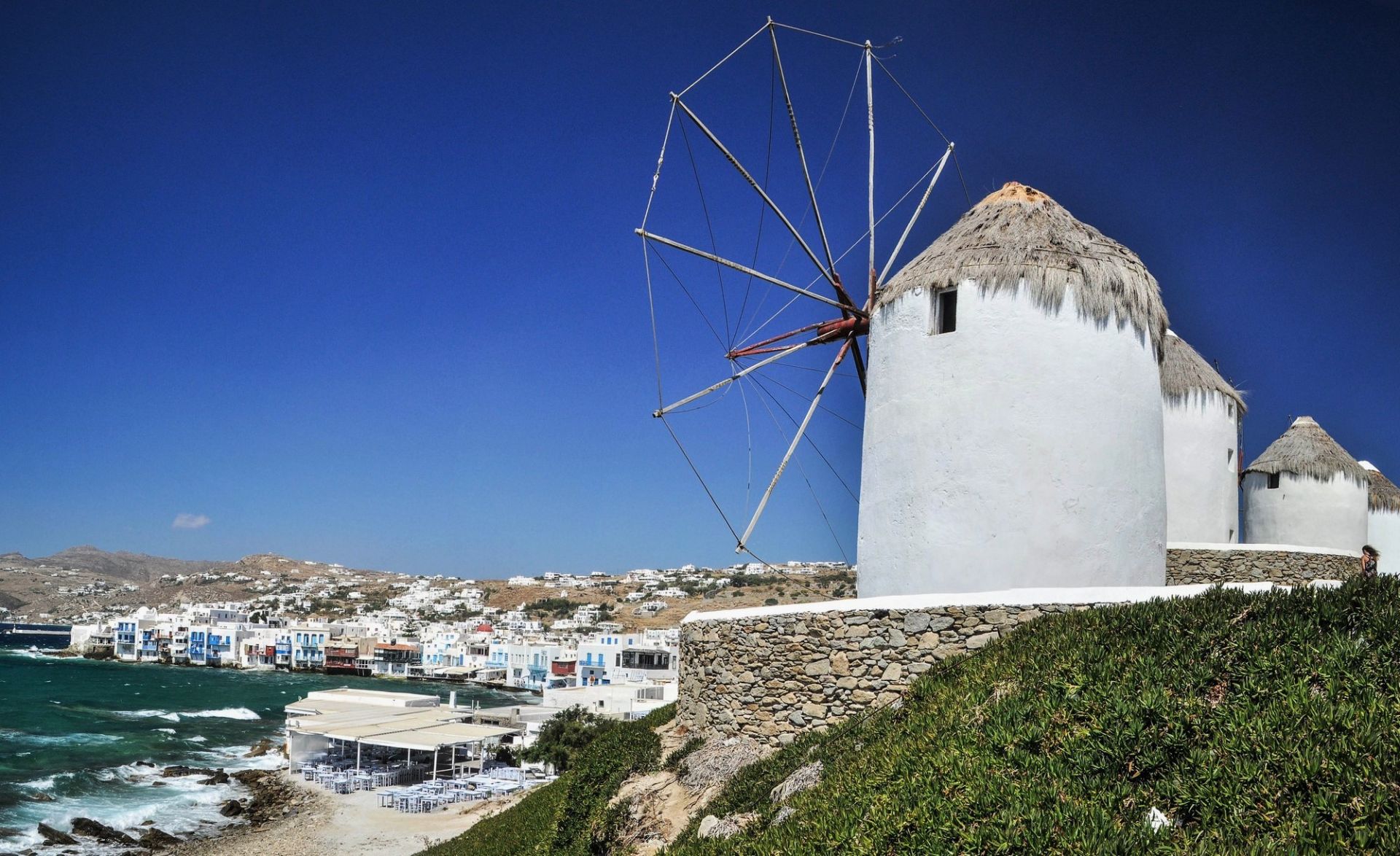 Mykonos town: sights to be discovered

The old town of Mykonos

Mykonos old town is arranged in the shape of an old amphitheater, on the slopes of the hill where the famous windmills rise; from the port a dense web of streets start, easy to get lost in. They branch off from the main street, Matoyianni Street, the only true reference of the town against the maze of narrow streets originating from the Cycladic town planning that sees the typical small white houses with the doors and blue shutters leaning against each other. A pleasant walk will take you to tourist bazaars, elegant shops, hotels and guest houses, bars and taverns, even up to the windmill hill overlooking the town. From here, in fact, you can enjoy a beautiful view of the city and, in particular, of Little Venice, a characteristic and very romantic area. 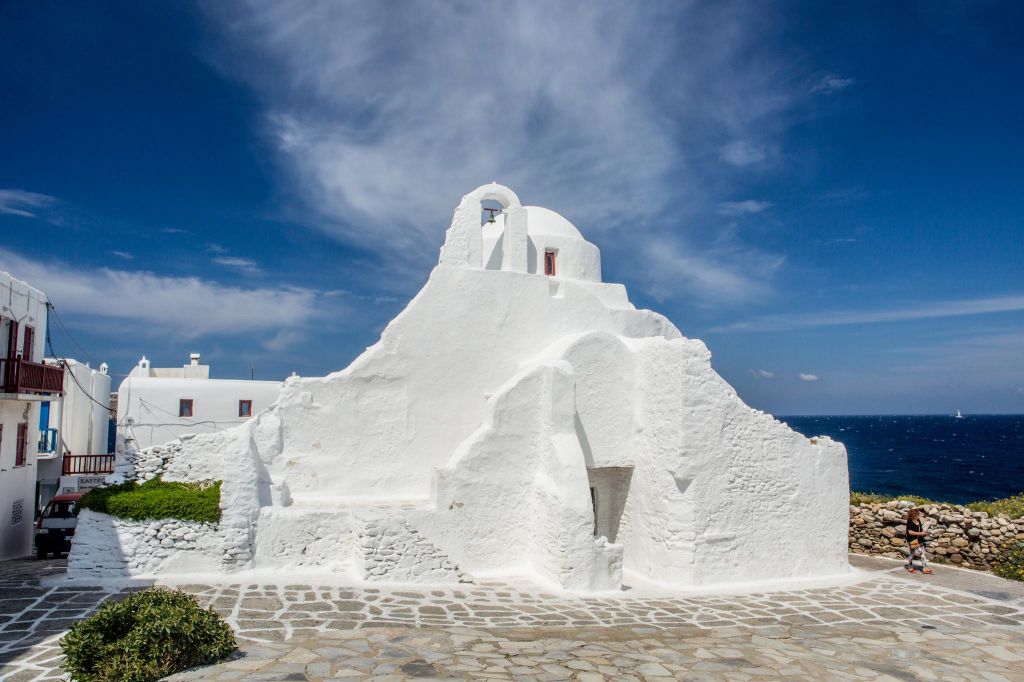 Near the port is the church of Panagia Paraportiani, the oldest of the island, dating back to the 16th century. The term Paraportiani refers to its position in front of a secondary entrance to the Kastro, a medieval castle of which today only scattered traces remain. Unfortunately it is not possible to enter the church and therefore we must be content to observe it from the outside which, in any case, represents the most interesting part: it is, in fact, four churches (Agioi Anargyroi, Agia Anastasia, Agios Efstathios, Agios Sozontas), reconstructed over time on different levels. This gave it a singular wall asymmetry that knows no edges. The church is very famous, so much so as to be one of the points of reference as a meeting place. It is located just after the little Venice, in a less crowded area. The church also gives the name to the square where once could meet Petros, the symbolic pelican of Mykonos. 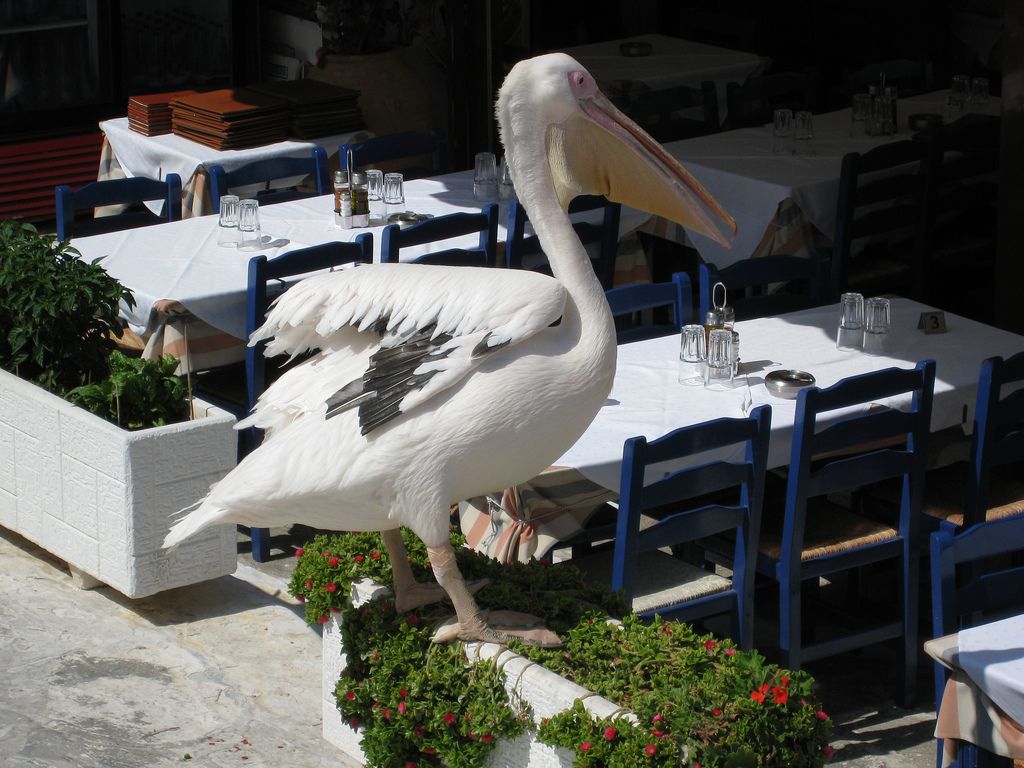 Today Petros, accidentally killed by a taxi driver in the early 90s, is stuffed and dispayed in the town museum. Some of the other pelicans often find themselves snoozing in front of the downtown taverns. The town hall is an elegant two-storey building built in 1785 as the residence of the Russian consul Ivan Voinovich. When Greece gained independence it passed under the municipal jurisdiction and became the Municipality of Mykonos. 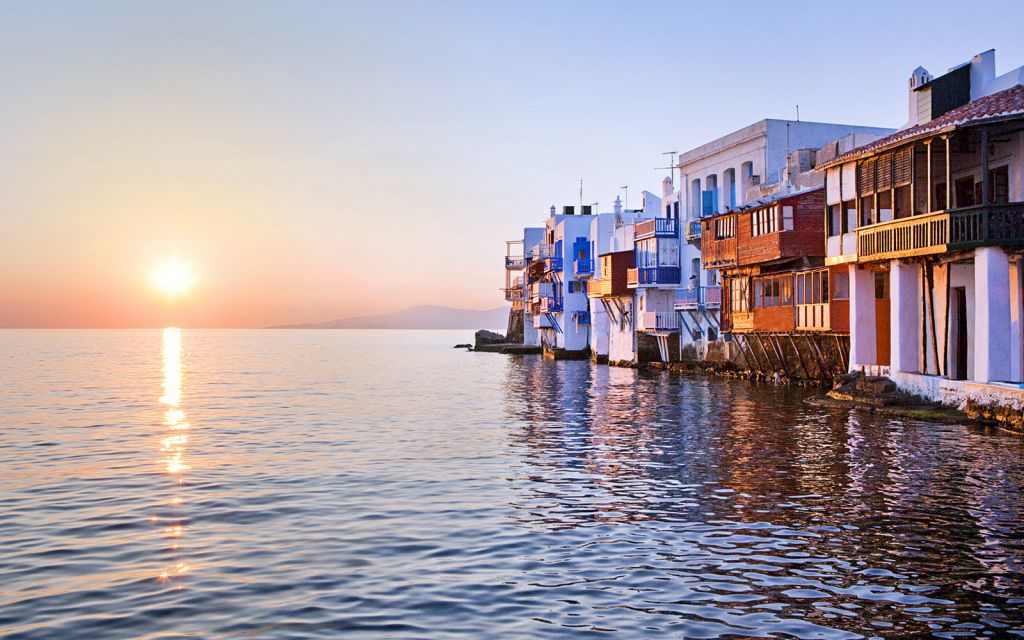 One of the most famous places of Mykonos is Little Venice, the district characterized by ancient houses overlooking the sea with part of the foundations in the water. The appearance is clearly similar to that of the lagoon city, so much so that the official toponym Alefkandra [Αλευκάντρα] fell into disuse to be replaced by that of Little Venice. Difficult not to be enraptured by this fascinating scenery. Its beauty attracts many internationally renowned artists: painters and photographers have portrayed its charm in their paintings and photographs, thus spreading its fame all over the world. Most of these houses have been transformed by famous architects into elegant bars and restaurants. In the inner area, the alleys teem with shops and boutiques. At sunset, Little Venice brings out its two souls, the romantic one with the view of the sea and the windmills, and that party that entertains until the first light of the morning. Most of Mykonos's most exclusive clubs are located in this magical place to spend the night among the many small discobars and stroll through the streets full of people. 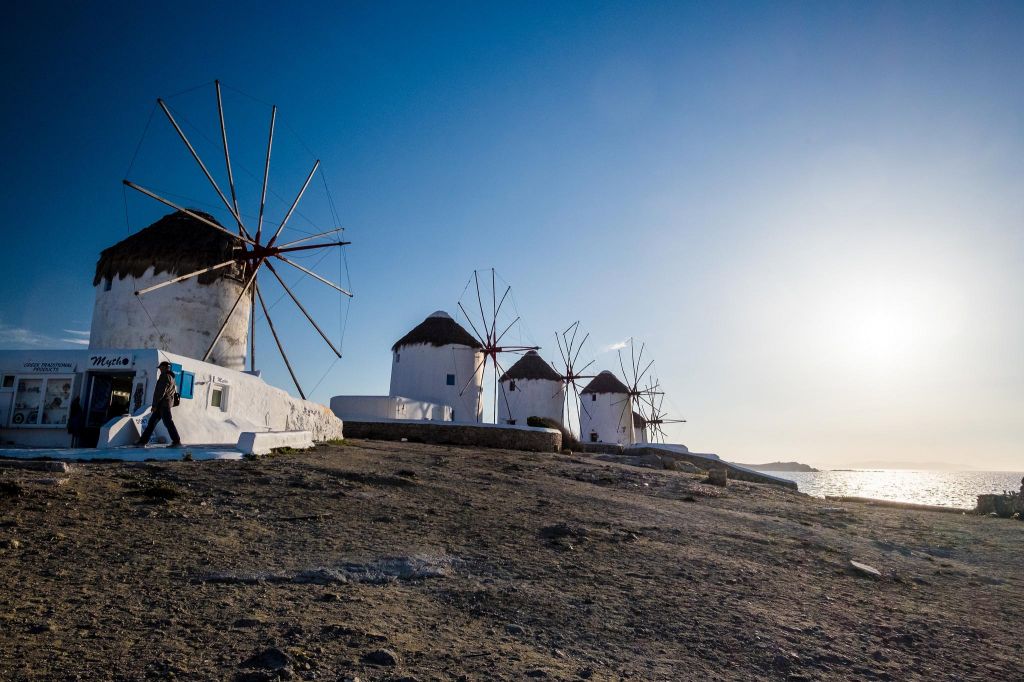 Windmills have become a characteristic symbol of Mykonos and most of the Greek islands, especially the Cyclades. Mykonos was in a strategic position for the trade routes between Venice and Asia. There was a need to refine the grain and prepare it for transport. The island was also perfect from the point of view of weather, as it was lashed by the meltemi. Thus, at the beginning of the 16th century, some mills were built in an area easily reachable from the port, where the grain had to be brought and loaded on ships. They were not used only for wheat, but for the pressing olives from which the oil was obtained. These agricultural productive activities brought the island, between the seventeenth and nineteenth centuries, to an economic prosperity. In the twentieth century, more precisely in the years following the First World War, when technological advances led to the industrialization of the processing of wheat and olives, windmills fell into disuse to be completely abandoned and thus become old ruins. Their appearance is similar to the Cycladic houses: the white lime walls are topped by a conical wooden roof. The good idea to renovate them and make them a tourist attraction has gone beyond any minimum forecast: today the mills and Little Venice are the most photographed subjects of Mykonos.

In addition to interesting churches and chapels, the island hosts some small museums that can represent a cultural break during sea days and nights of fun.

The archaeological museum was established in 1902 to preserve a series of artifacts found in 1898 by the famous scholar Dimitri Stavropoulos on the islet of Rinia: a large number of prehistoric vessels, stone statues, columns and cinerary urns from the post-Hellenistic period. Part of the findings also comes from the archaeological site of Delos. One of the most interesting objects in the collection is a seventh century vase. B.C. with bas-reliefs that tell some episodes of the Trojan war. In fact, the famous wooden horse can also be seen. The Aegean naval museum is located in the center of Chora, in the area known as Tria Pigadia. The building was once home to the legendary master of merchant ships Enosis, Nicolaos Sourmelis, who supported the Cretan people during their war of independence from the Ottoman Empire. The exhibits include models of ships from the pre-Minoan period up to the beginning of the 20th century, documents, engravings, maps, artifacts, navigation devices, as well as a rare collection of coins with nautical subjects. The museum library contains more than 5,000 volumes of rare books, ancient manuscripts and recently published books. It is continuously updated with new archival material. In the museum garden there are reproductions of ancient marble slabs from the islands of Mykonos and Delos, evidence of the many shipwrecks that occurred in the stretch of sea that divided the two islands. Near the church of Paraportiani, there is the popular art museum. It rises above some ancient fortifications, the last remains of the kastro. You can admire  collections of dishes, antique furniture, prints and traditional clothes. You can visit a bedroom and a kitchen that well bear witness to the ancient public housing. The basement is reserved for a collection of naval models, old cannons, photos and a ship that participated in the 1821 war of independence.

If you decide to come and discover the island for your summer holidays, Check out our Mykonos luxury villas and exclusive services for our customers.